As we’ve had to postpone our travels because of the pandemic, I believe a weekly dose of travel dreaming can be good medicine. Here’s one of my favorite European memories — a reminder of the inspirational sights that await us at the other end of this crisis.

I’m in York (the most interesting stop between London and Edinburgh), following Edwin, a wry and spry retired schoolteacher, on a walk around town. Edwin stays active leading town walks and giving private tours. Today, he’s taking me to what he considers the finest church in England.

York is the most interesting town between London and Edinburgh for a reason. And Edwin is ready with an explanation: In the Victorian Age, most big cities embraced the Industrial Revolution, tearing down their walls and inviting the train tracks to run right through their center. But the people of York kept their walls and required the train station to be built just outside the center. While less efficient at the time, this left the city a historic treasure cradled entirely within the surviving walls. Those York Victorians not only saved their wall, they also amped up its historic charm with a remodel, giving it fanciful crenellations and arrow slits.

With that, we step into York Minster, the pride of the city. It’s one of the most magnificent churches in Britain and the largest Gothic church north of the Alps. Splashed with stained glass and graced with soaring ceilings, this dazzling church brilliantly shows that the High Middle Ages may have been dank, but they were far from dark.

Gothic architecture was a big improvement over Romanesque, if you like light. Light is a key ingredient when creating a worshipful environment and, when it comes to “let there be light,” it’s all about stained-glass windows.

The Minster is famous for its 15th-century stained glass, especially its Great East Window, which is the size of a tennis court. The window’s fine details — far too tiny to see from the floor — were originally intended “for God’s eyes only.”

But Edwin has opera glasses. He pulls them from his satchel so I can study the window as he guides me: A sweeping story is told in more than 300 panels of painted and stained glass, climaxing with the Apocalypse. It’s a medieval disaster movie — a blockbuster back in 1408 — showing the end of world in fire and flood and pestilence, vivid scenes from the Book of Revelation. Angels trumpet disaster against blood-red skies. And there it is, the fifth panel up on the far-left side: the devil giving power to the “Beast of the Apocalypse,” a seven headed, 10-crowned lion, just as it was written in the Bible. This must have terrified worshippers. This British masterpiece was unprecedented in its epic scale, created a hundred years before Michelangelo frescoed the story of the beginning and end of time at the Sistine Chapel in Rome. One of the great art treasures of the Middle Ages, it’s the work of one man: John Thornton of Coventry (who, I think, deserves a little of Michelangelo’s fame).

The church also holds a full carillon of 35 bells, so church-bell enthusiasts can enjoy a little ding-dong ecstasy during the weekly bell concerts. Edwin has another guiding appointment. But before leaving, he introduces me to a deacon, who delights in showing off this pride of the Minster. He leads me upstairs a few flights and into the bell tower to show off the biggest bell. We come to a stony room — vacant except for a fat, lifeless rope dangling from the ceiling. With childlike enthusiasm, the suddenly animated deacon begins pulling the rope. He reaches and reaches, pulling ever higher and ever lower, and I ready my ears for a thunderous sound. Suddenly the deacon clenches the rope and becomes airborne, soaring high above me as ear-shattering clanging rings throughout the town. Eventually landing back on the medieval wooden floor, he winks at me and says, “In York, our bell is so big it rings the ringer.”

He invites me to attend the evensong service, reminding me that it’s a good way to fully experience York Minster. Later that evening I return, arriving early to get a prime seat. It’s a spiritual Oz, with 40 boys singing psalms: a red-and-white-robed pillow of praise, raised up by the powerful pipe organ.

As the boys sing and the organ plays, I ponder the towering Gothic arches — stone stacked by locals 700 years ago, still soaring like hands folded in prayer. I whisper, “Thank God for York. Amen.”

Edmonds resident Rick Steves writes European guidebooks, hosts travel shows on public TV and radio and organizes European tours. This article was adapted from his new book, “For the Love of Europe.” 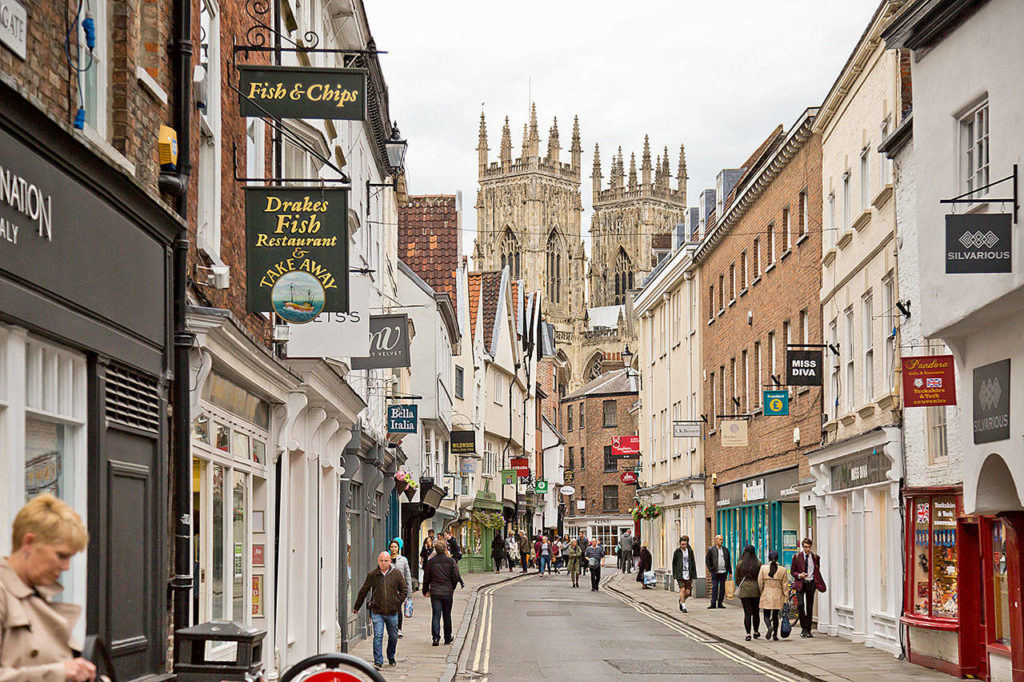 A typically narrow English street leads to York Minster, one of the great churches of Europe. (Rick Steves’ Europe)

How to keep pesky weeds away for a much healthier garden