Kevin Ashe (right) and his daughter, Carly Nations, prep meat before opening time at the IGA in Darrington. (Olivia Vanni / The Herald)

You get Sheila Ashe or the live voice of another IGA worker.

Better call soon if you want to speak with Sheila.

Ashe, 64, the bookkeeper and then some, is retiring in a few weeks, along with her husband, Kevin Ashe, 67, store vice president and meat cutter, and his brother, Randy Ashe, 68, general manager and president. The three combined have put in about 100 years at the store built in the 1970s by the men’s parents.

In mid-April, the Darrington IGA will no longer be in Ashe hands.

The new owner, Tyler Myers of the Myers Group, is keeping all 25 employees, which include Sheila and Kevin’s two daughters. But gone will be those three familiar faces who have greeted thousands of customers.

After showing up at the store six or seven days a week, the Ashes say they are ready for some R&R.

Randy Ashe works in the front office of the IGA in Darrington. (Olivia Vanni / The Herald)

“I’ve lost the fire,” Randy Ashe said. “It takes a lot of energy and planning. You’ve got to put your heart and soul into it.”

He plans to grow a big garden, travel and do some fishing.

“I’ll probably still get up at 4 o’clock every morning. I spent about 20 years as a logger. It’s a habit I kept over the years,” he said. “The thing I’m going to miss the most is the people. That’s going to be the tough part.”

His mom, Ivonne Ashe, 88, stayed on for about five years after her sons bought the store from her in 2003.

She decided to retire after being snowed in at home for a week.

Kevin Ashe inventories meat at the IGA in Darrington, which his family has owned for decades. (Olivia Vanni / The Herald)

She’s cool with the store changing hands because she approves of the new owner.

Randy Ashe said Myers approached them about buying the store when they were ready. The store has been affiliated with the Myers Group for a dozen years.

“We feel comfortable with Tyler keeping the hometown atmosphere,” he said. “As they say in the old Westerns, he’s one to ride the river with.”

Prior to building the IGA, Ivonne Ashe and her then-husband, Louie, ran a small market in Darrington. She was a full fledged butcher, cutting beef, pigs and venison. The shop was getting rundown and she wanted a bigger, better place. She liked the way IGA stores operated, and grudgingly gave up butchering to do the books.

“It was nice,” Ivonne Ashe said. “People would walk through and say, ‘I never thought we’d see a store like this in Darrington.’”

The store underwent three remodels since. The last was over $1 million, she said.

Inside are seven long aisles and four checkout counters.

The bulletin board lists honey bees for sale, the world’s best firewood, massage therapy, an Army recruitment plea and a sweet deal on a vintage clarinet.

Across town, five blocks away, its chief competitor, Family Grocer, shut down years ago. It’s a car repair place but still has the grocer sign.

The IGA, 35 miles from the nearest Costco, offers things not found at big box stores: logging suspenders. Darrington school hoodies. Locally made dog treats for the everyday low price of $3.99.

There’s not many places left with phone service like this.

When school teams play out of town, people call to get the score, which also gets posted on the reader board.

“I had a lady call the other day to see if it was too early to plant her rose bushes,” Sheila Ashe said.

People coming to town call to ask what the weather is like or where to stay.

“I had somebody call and say, ‘You know, I think I left my glasses over at the Burger Barn. Can you run over there?’” she said.

She obliged. Yep, the glasses were there.

In October 2014, the Ashes received the Washington Food Industry Association’s Community Service Award for their efforts after the March 22 Oso landslide in which 43 people perished.

The Ashes offered food and drinks to volunteers and first responders searching the mud.

“We fed that crew down there for about the first week. We’d take it to them or have it delivered,” Randy Ashe said.

The IGA was a hub for people looking for information or just wanting to talk.

“People from all over the country started calling us asking us questions and donating money,” Sheila Ashe said. “It was humbling to be trusted.”

She called in her sister to do the books while she handled the phones.

Calls came in from all over the nation.

“They’d call and say, ‘I’d like to buy $50 worth of drinks for the next people at the espressos stand.’ One lady wanted to buy all the boys a beer,” she said. “Whatever they wanted, we would do it.”

The parking lot filled up with satellite TV trucks. The Ashes opened up the store’s restrooms to all. They opened their homes to outsiders needing a place to stay.

Seven years have not dimmed the pain.

“Even now it is hard to even talk about it,” she said.

The pandemic turned the employees into frontline workers. Sanitizing and safety measures were implemented. The store dealt with supply shortages.

“For the grocery stores, business has been really good,” Randy Ashe said. “It’s the poor restaurants and bars that really suffered.”

On a recent weekday afternoon, business was steady.

Glad Tidings Assembly of God pastor Tim Ziesemer strolled the aisles while exercising restraint. His blue metal cart had oranges, yogurt and a fruit bowl for a new diet he started. He’s there almost daily.

“I like supporting a local business and supporting friends,” Ziesemer said. “Sometimes I’ll come in to get something, but it’s more of an excuse to come in and talk to Randy.”

An aisle over, Ian Ayers, a college student, pulled a load from the walk-in freezer.

His bosses are his former coaches. “Randy and Kevin coached me in middle school basketball,” he said.

Longtime customer P.J. Wieferich said when she first moved to town from Alaska, she made her first friend at the IGA store.

She recalled how her son, James, would wear his Batman suit and whoosh through the aisles asking shoppers, “Do you need any heavy lifting done?” James is 21 now, and going to film school in Seattle.

Wieferich, a school district worker, said the store has donated to numerous projects.

Wieferich’s sentiment of the Ashe family reflects that of many people in town.

“I can hardly envision this store without them in it,” she said. 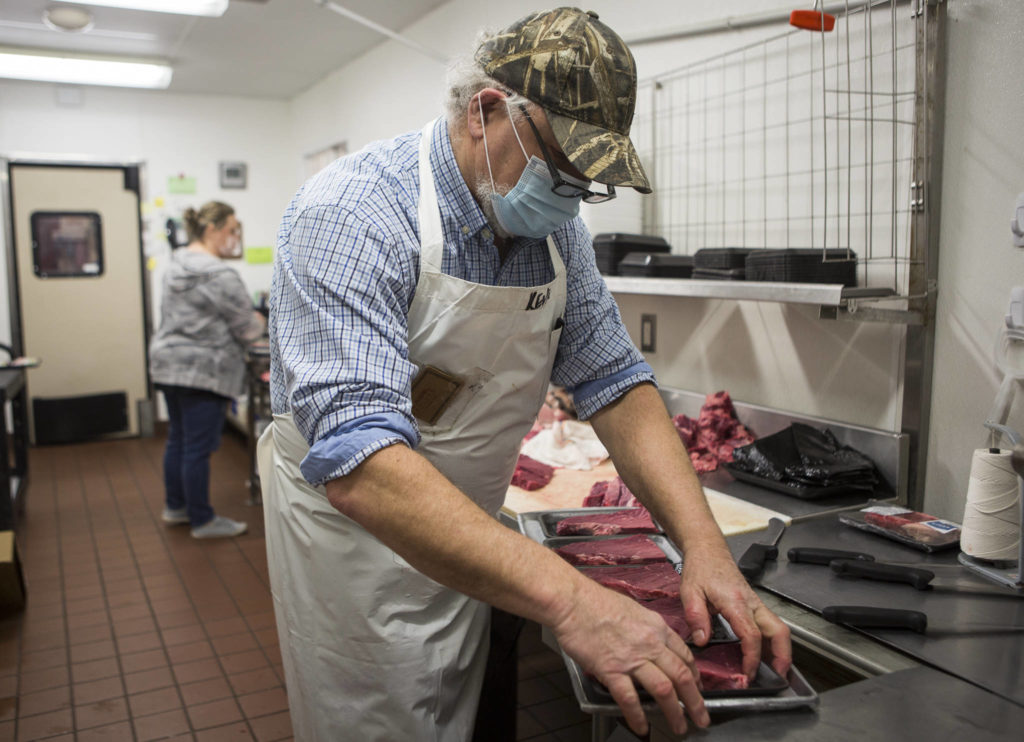 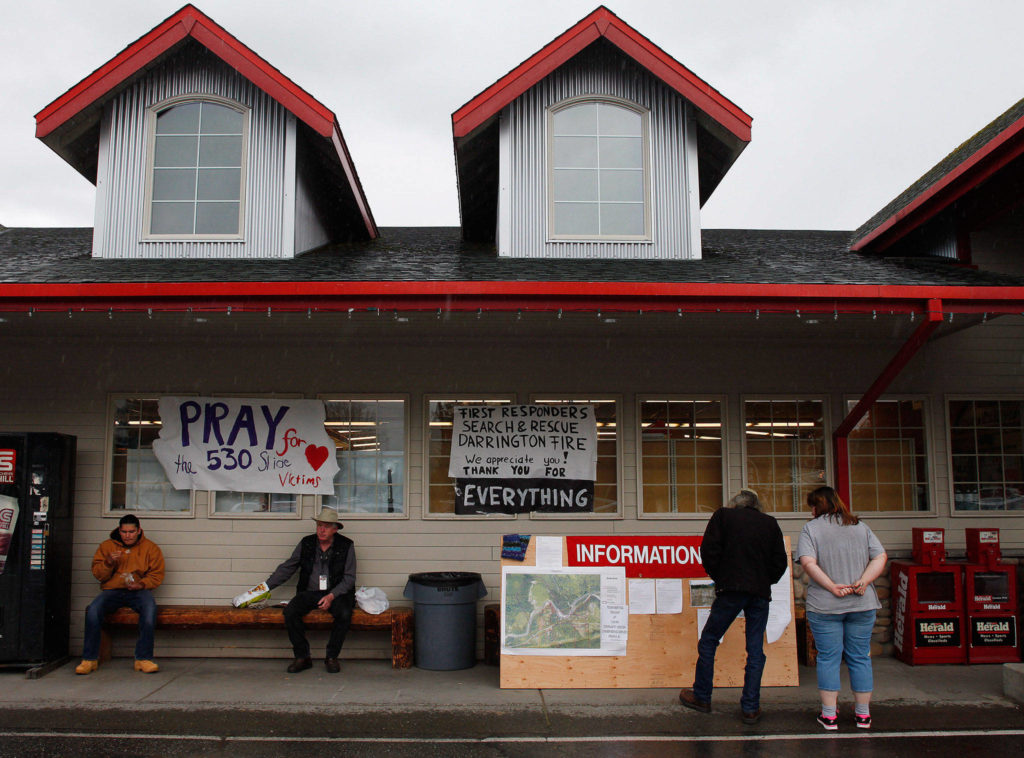 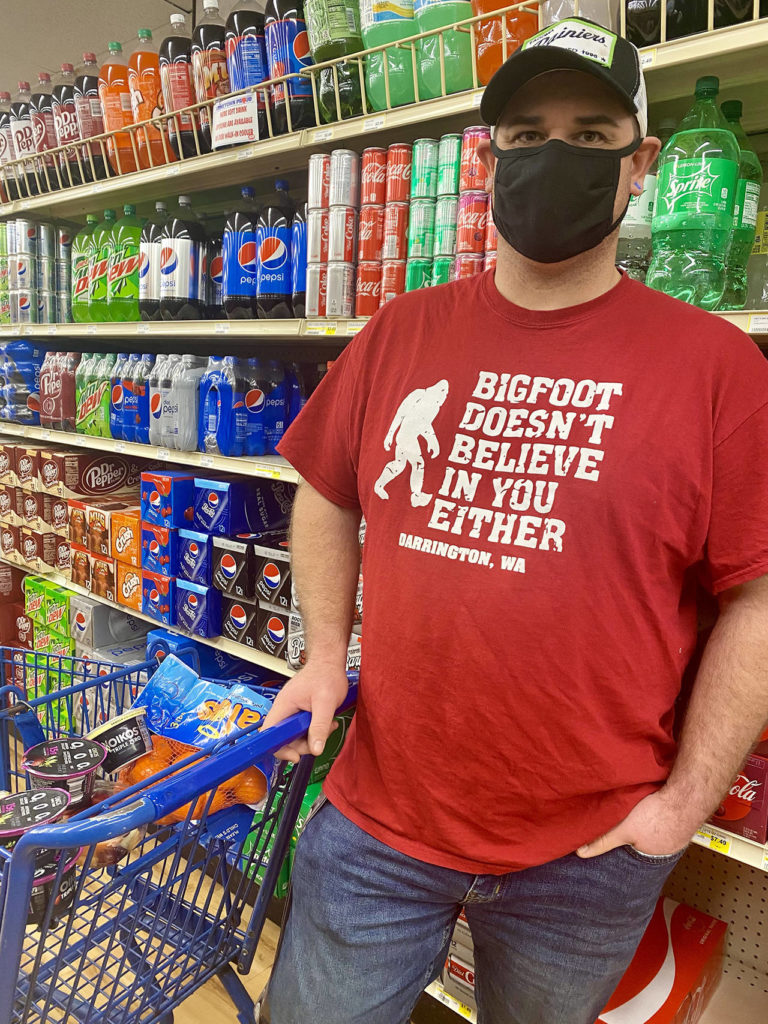 Kevin Ashe (right) and his daughter, Carly Nations, prep meat before opening time at the IGA in Darrington. (Olivia Vanni / The Herald)

Randy Ashe works in the front office of the IGA in Darrington. (Olivia Vanni / The Herald)

Kevin Ashe inventories meat at the IGA in Darrington, which his family has owned for decades. (Olivia Vanni / The Herald)

People gather outside the IGA grocery store to read the latest information on the Oso mudslide on Tuesday, March 25, 2014 in Darrington, Wash. (Genna Martin/The Herald)