SEATTLE — As improbable as a Seahawks win felt, and despite self-inflicted wounds and an offense forced out of its ground-and-pound approach, Seattle had an opportunity on the game’s final play.

Seattle, trailing by eight points, found itself with a final untimed down and a first-and-goal on Los Angeles’ 6-yard line. Wilson dropped back to pass, worked his way up the pocked and fired a ball to David Moore, who was crossing along the back of the end zone. Moore couldn’t hold on, as the ball appeared to be tipped by Chargers safety Jahleel Addae.

Moore stayed plastered, face-down against the CenturyLink turf while the Chargers celebrated the dramatic victory.

“We had a chance to win a football game today, but we didn’t do enough good things to get it done,” Seahawks coach Pete Carroll said.

The Seahawks (4-4) committed 10 penalties, costing 83 yards. The fouls kept Seattle’s running game off-schedule, and with Chris Carson sitting the second half with a hip injury, the Seahawks generated little offense after a game-opening 75-yard touchdown drive.

“It’s a tough one,” Seahawks tackle Duane Brown said, “considering the kind of football we’ve been playing. We got away from that on the offensive end, so we’ve got to get back to our identity, get back to what we know and get ready for another big game this week.”

Wilson, though, responded with a 14-play, 54-yard scoring drive capped with a 6-yard touchdown pass to Nick Vannett. The score trimmed the Chargers’ lead to 25-17 with 1:50 to go.

Seattle forced a Los Angeles punt, and Wilson in 1:01 moved the Seahawks from their own 22 to Los Angeles’ 20 with 23 seconds to play.

With the clock ticking down, Wilson snapped the ball with 5 seconds left and heaved a pass to Tyler Lockett in the left corner of the end zone. Pass interference was called, giving Seattle its final untimed down. A false start moved the ball back to the 6-yard line, setting up the final incomplete pass from Wilson to Moore.

Wilson, who attempted 17 passes last week, completed 26-of-39 passes for 235 yards with two touchdowns and an interception. Rivers threw for 228 yards and two scores, and Allen caught six passes for 124 yards. Gordon ran for a game-high 113 yards and a touchdown on 16 carries, helping Los Angeles to a 7.3 yard-per-carry average.

The loss drops the Seahawks to .500 through nine weeks of the season. The defeat was the first of four consecutive matchups against teams with winning records. Seattle follows with a road game next Sunday at the NFC West-leading Los Angeles Rams before hosting Green Bay on a Thursday night, which is followed by a game at Carolina.

Bobby Wagner, Seattle — Wagner recorded a game-high 13 tackles and had three passes defensed. The All-Pro was all over field and gave Seattle’s defense a major boost.

Mike Davis, Seattle — Davis finished with a team-high 62 rushing yards on 15 carries and caught a team-high seven passes for 45 yards. Davis, who in past weeks has played a complementary role to Chris Carson, was more heavily featured in the second half with Carson sidelined with a hip injury.

“I knew it was a tight window, and we tried to get it in there. I think it maybe got tipped a hair a little bit. It was tough. David has done a great job all year making those plays. Like I said, he’s going to make the next one no doubt.” – Seahawks QB Russell Wilson on his final pass to David Moore

“I was fired up for many reasons — some personal, some just excited. I love playing here. This is probably my last shot playing here. It’s exciting when you play in this kind of atmosphere and environment.” – Los Angeles QB Philip Rivers

“I feel like it changes the physicality, I guess. I feel like Chris can do it all. I feel like Penny can do it all. I just felt like we weren’t clicking as much as we should, and in other games we usually click more. Today, with the penalties, I think we shot ourselves.” – Seahawks RB Mike Davis on not having Chris Carson

“That is a good team over there. We knew it was going to be a hard-fought game. We knew we were really going to have to be on our game to stop them, and it wasn’t like that in the first half. We have to do better. The defense has to do better.” – Seahawks LB Bobby Wagner

Seattle, despite playing from behind all game, found a way to set-up a tying score on the game’s final play. The Seahawks, trailing 25-17, received one untimed down after Los Angeles committed pass interference in the end zone on what would have been the game’s final play. Russell Wilson dropped back to pass, but quickly scrambled to avoid the pass rush. He fired a pass to David Moore who was crossing along the back of the end zone, but Moore couldn’t hold on after the ball appeared to be tipped at the last second by Los Angeles safety Jahleel Addae.

David Moore did not make himself available for postgame comment. As reporters approached his locker, Doug Baldwin blocked the pack and said he wasn’t going to take questions while Moore walked out of the locker room.

83 — Number of penalty yards given up by Seattle.

40 — Number of total rushing yards by Chris Carson, who didn’t play the second half. 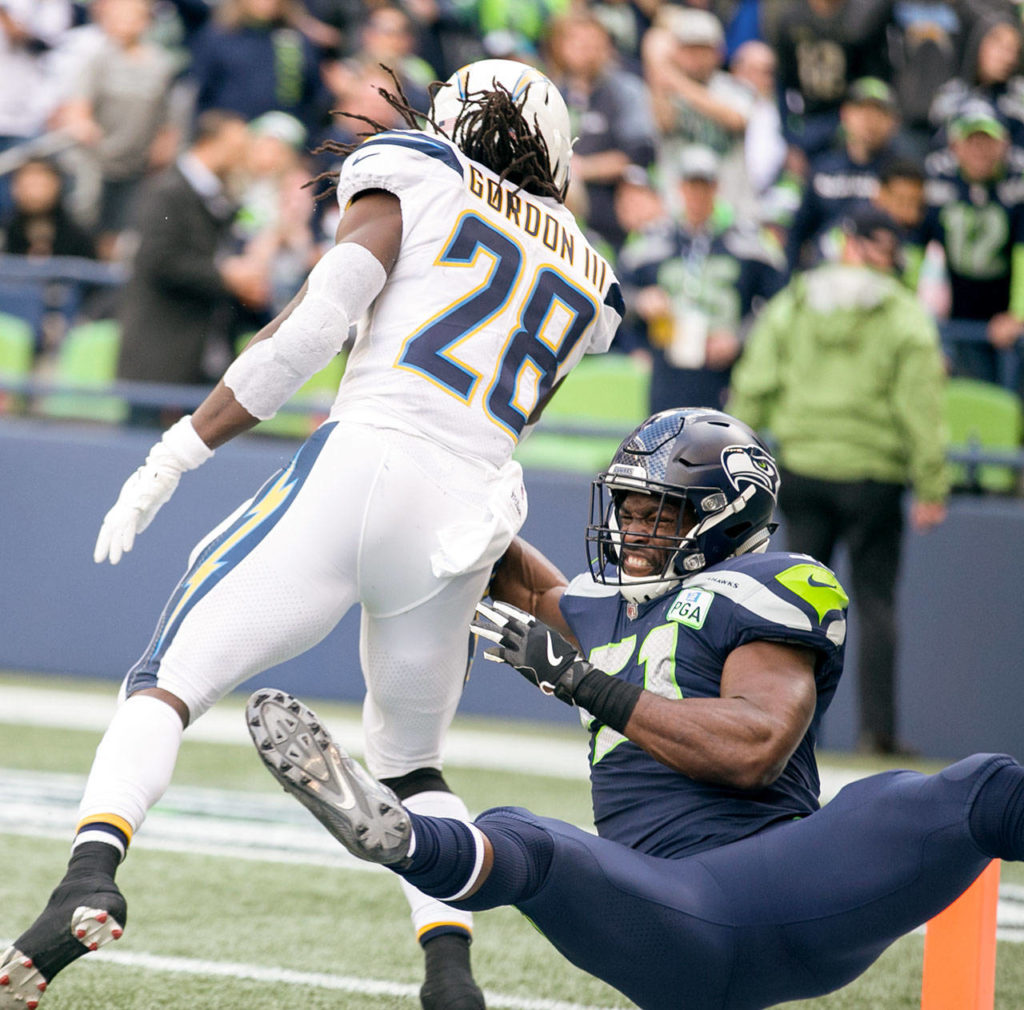