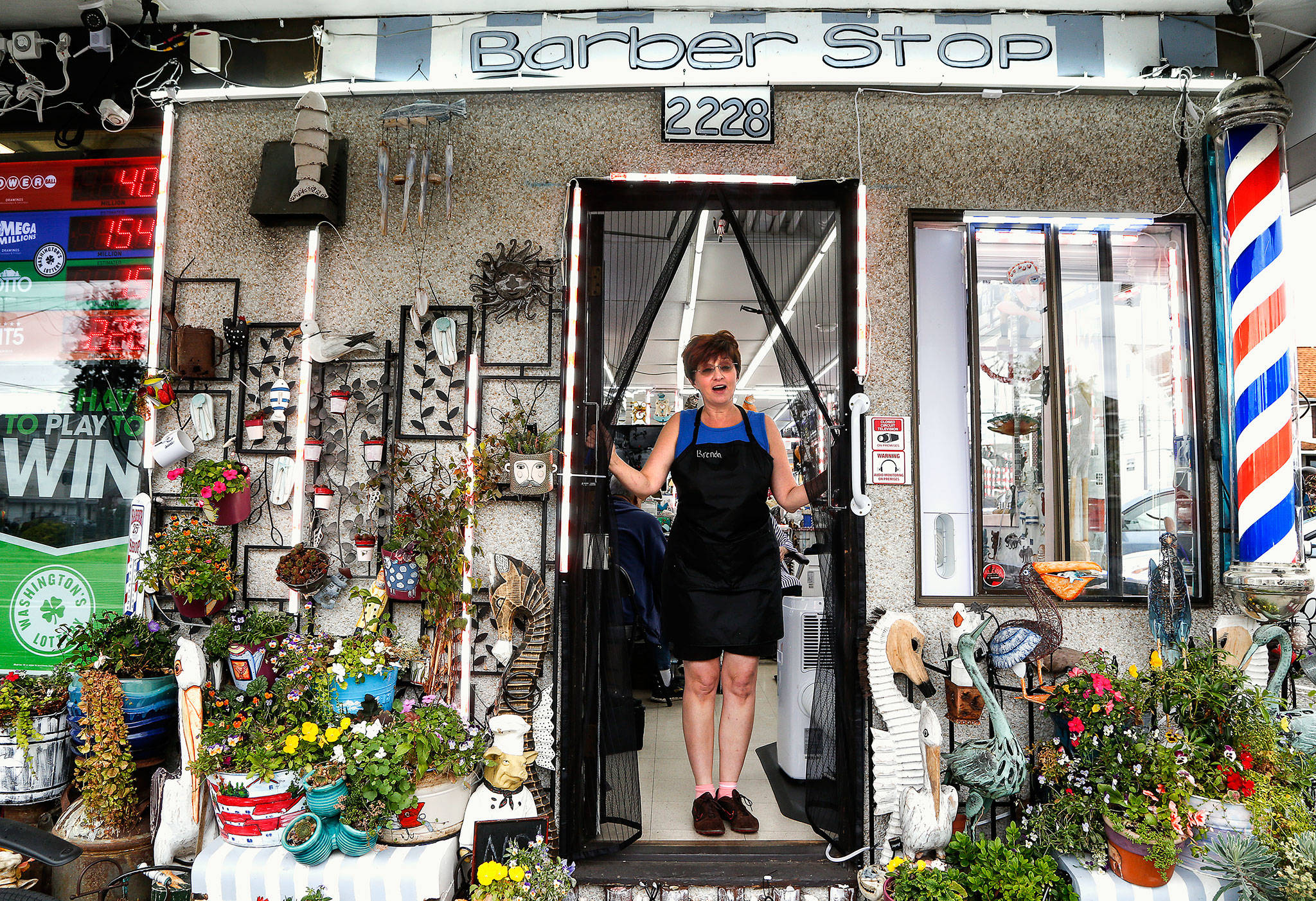 Flowers, faux sea creatures and other decor line the exterior of the Barber Stop as owner Brenda Humbert welcomes a visitor. (Dan Bates / The Herald)

It’s not a doll-sized beach, fishing pier or an undersea scene from “The Little Mermaid” or “SpongeBob SquarePants.” It’s not a garden store or floral business. With all the whimsy and colorful blooms outside, passersby might miss that the storefront a couple blocks north of Everett High School is actually a barber shop.

Brenda Humbert’s Barber Stop Shop has become a sort of streetside attraction. Along the Everett sidewalk, stretching past the Welch’s Food convenience store next door, dozens of flower pots are filled with plants of all kinds — bright pink impatients and pretty pansies to prickly hens-and-chicks succulents.

The shop’s exterior is done up in a nautical theme. A tiny pier, with shell-covered piles, greets guests at the entryway. Gull, pelican and seahorse figurines, a faux lighthouse, a mini ship’s wheel and fishing nets add to the kitschy tableau. Sammy the Seagull, after all, is Everett High’s mascot.

All that’s just the outside. Visitors who step into the Barber Stop Shop, where on Wednesday Humbert was snipping John Stupey’s hair, are met with more sensory overload.

Bright strips of neon-style LED lights illuminate the place. Walls are lined with mirrors. And overhead, all around the shop, are novelty clocks. The famous Felix the Cat, with tick-tock eyes and a pendulum tail, is just one of Humbert’s many quirky timekeepers, some handmade.

Brenda Humbert’s Barber Stop Shop is filled with colorful distractions. John Stupey has plenty to look at from the barber chair. (Dan Bates / The Herald)

To say it’s all in fun isn’t the whole story. Fun, yes, but all that playful decor is part of the Everett woman’s effort to make a difference in a place she loves.

The 53-year-old Humbert, who runs the shop with her husband Rex Humbert, moved the business to 2228 Colby Ave. about two years ago from its previous Everett location, the 5700 block of Evergreen Way. There had been enough crime in that area, Brenda Humbert said, that her shop had stopped taking cash.

Brenda Humbert grew up in the area, attended Cascade High School, and enjoys north Everett’s old neighborhoods and sidewalks. “It just needs to be cleaned up,” she said.

After moving the shop onto Colby, Humbert said she was troubled by drug use she saw in the parking lot just north of her business. She uncovered the windows overlooking that lot and began planting flowers, decorating and putting up hand-written signs to discourage trespassers.

The Humberts also put up surveillance cameras, 13 of them. Some of what those cameras captured has been helpful to police.

“She has been very cooperative with us,” said John DeRousse, the Everett Police Department’s deputy chief. He said Friday that after an armed robbery last year at Welch’s Food, images provided by the Humberts’ cameras helped police put out a bulletin seeking suspects.

“We’re always very thankful and encouraging when we have not just business owners but citizens fixing up property and helping,” he said.

DeRousse, an Everett police spokesman, also said he believes Humbert was helpful in the investigation of the 2017 fatal fire at Colby Square Apartments across from the barber shop. In June, 42-year-old William Matthews was sentenced to 10 years in prison after pleading guilty to first-degree manslaughter and first-degree arson. The fire killed Elsie Flynn, 76, an apartment resident.

Eun Han owns Welch’s Food next to the Barber Stop Shop on Colby Avenue. After a 2018 robbery at the convenience store, police were helped by the barber’s surveillance cameras. (Dan Bates / The Herald)

For 11 years, Eun Han has owned Welch’s Food, the store but not the property at 2230 Colby Ave. He said Friday he’s grateful for the barber shop’s “good cameras,” which provide audio as well as images. His store has a camera, but it’s a decade old, he said.

His customers sometimes think they can buy the flowers out front, but he tells them they’re all Humbert’s doing and aren’t for sale. Han, 48, has seen improvements in the neighborhood. It’s safer and cleaner than it was six or seven years ago, he said.

And all that wacky decor next door? “At first I thought it was too much, but now I like it,” he said.

“It should be a safe area for people,” she said. Brenda Humbert’s Barber Stop Shop is filled with colorful distractions. John Stupey has plenty to look at from the barber chair. (Dan Bates / The Herald)

Eun Han owns Welch’s Food next to the Barber Stop Shop on Colby Avenue. After a 2018 robbery at the convenience store, police were helped by the barber’s surveillance cameras. (Dan Bates / The Herald)

Thanks to Brenda Humbert, faces decorate pots with little chicks-and-hens in front of Welch’s Food next door to Humbert’s shop. (Dan Bates / The Herald)

Snohomish County farms shrink, but there are more of them