“The Galloping Gourmet” star Graham Kerr tells the story of what he calls his “abundant life” to residents of Windsor Square Retirement Community in Marysville. Kerr, 88, lives in Warm Beach. (Ryan Berry / The Herald)

MARYSVILLE — He didn’t leap over a chair. He just strolled into the dining hall.

Even without an ascot tie and glass of wine, the Galloping Gourmet can make an entrance.

Sporting his same 1960s classic side-part hairstyle, albeit grayer, his recent talk to an audience of about 60 women and a few men at Windsor Square Retirement Community in Marysville focused more on ministry matters than kitchen shenanigans.

He didn’t flirt, per se, but the guy sure exudes charm. And it’s not just his English accent.

“I’ve had two lives,” Kerr said. “My first life has been very much in public with about 200 million viewers in 138 countries around the world. And then the second half of my life, which has been the last 47 years, in which I have come full face.”

Dressed in pleated trousers with a large cross necklace prominent over his black sweater, he looked more preacher than “the high priest of hedonism,” as he was dubbed.

These days, Kerr leads a teetotaling, TV-free life at the faith-based Warm Beach Senior Community, devoted to healthy eating and the gospel of global missions.

“I haven’t had television in my home for over 30 years,” he said.

He moved to Warm Beach after the 2015 death of Treena, his wife of nearly 60 years.

She was the producer of “The Galloping Gourmet,” which in its heyday from 1968 to 1972, earned two Emmy Award nominations. A modern-day reviewer termed Kerr “a mashup of Anthony Bourdain, Emeril Lagasse and David Letterman.”

On the show, Kerr would jump over a dining chair and whip up recipes with red meat and saturated fat paired with wine and double entendres.

Each episode began with a cheeky monologue and a prerecorded clip about a meal from an exotic region on his travels. Then he prepared the dish, swirling wine and witty lines in front of a live audience and telling more stories.

“It’s all very true,” he was known to say after a tale.

He was as much a stand-up comedian as a chef.

As an NPR story put it: “Compared in physicality to both Dick Van Dyke and Gary Cooper, Kerr was both goofy and handsome. Traditionally manly and virile, he was not. This, however, did not detract from his attractiveness, as scores of blushing female fans have suggested.”

All the females had crushes on him. They still do.

His fashion style was impeccable, even if he cooked in a suit of armor or boxer shorts and swim flippers. A lofty food writer labeled Kerr “the Liberace of the food world.”

“Any man can slosh this out,” Kerr says on the “Rum Baba” TV series episode about the cake filled with rum, cream, fruit and more rum. He goes on to tell how he accidentally sat on a baba cake at a catering party and acted out how he tried to hide the stain on his behind as he sidled his way across the room.

All very true, of course. And if not, so what.

“I used to come home every day from school and get a snack and turn on Graham,” Windsor Square resident Kim Butterfield said. “He was quirky and fun and you felt like he was your friend. He still looks youthful and his personality is still there.”

Graham Kerr dashes by “The Galloping Gourmet” audience on the show that made him an international star in the late 1960s. (Bob Peterson / Rizzoli New York)

They were served sparkling cider, not wine.

“I have not had anything else but a taste only, and that’s a sip, for 47 years,” Kerr said after the talk.

His drinking on the show has been the topic of tawdry gossip.

“When I ran in with that glass of wine and the audience responded and I jumped over the chair and told a silly story, I felt so welcomed and warmed that I was lifted off my feet and I went through a half-hour of bliss,” he said. “But between the programs was much harder.”

The spotlight made for a stressful family life for the Kerrs and their three children.

The show ended after he and Treena were injured in a car crash in California in 1971. That, and her addiction to painkillers, led to both of them becoming born-again Christians.

That started the second half of his life, the last 47 years, he refers to.

They spent two years at sea on an around-the-world “healing trip” on a yacht with their kids.

His comeback included a daily clip, “Take Kerr,” which featured a lighter recipe served with Christianity, and a PBS special with Julia Child.

He wrote a bunch of books. “The Graham Kerr Cookbook: by The Galloping Gourmet” with his classic dishes and humor was published in 1969 and in recent years was revised for reprinting. His autobiography “Flash of Silver … The Leap That Changed My World” was released in 2015.

A movie in the works about him, “Galloping Upstream,” focuses on his shift from decadence to simplicity. The Christian-based company is raising money to complete the documentary about his life.

Kerr was born in England to Scottish parents working in the hotel industry and he grew up around chefs. He was a catering adviser in the British Army, where he sat on the rum baba at an officers’ party. All very true.

“I can still feel the experience of sitting on it,” he told me.

Around 1960, he made his radio debut in New Zealand.

“I was awful,” he said. “They said, ‘For God’s sake, man, put some oomph into it. You sound so boring.’ Then they said, ‘We want you to go on television and cook something.’ I cooked an omelet.”

“The Graham Kerr Cookbook: by The Galloping Gourmet” with his classic dishes and humor was published in 1969 and in recent years was revised for reprinting. (Rizzoli New York)

Washington state became home in 1981, first in Spokane. He and Treena later lived in a Skagit County house he designed based on a yacht with portholes and teak rails.

He moved to a 900-square-foot apartment at Warm Beach in 2019 for the center’s spiritual activities and a continuum of care.

“Sooner or later I’m going to need a walker,” he said. “I don’t take any prescription medications. I’m still driving.”

He starts his day with purple porridge, a hot goo of oats, nuts and berries, topped with a splash of Greek yogurt and a “little secret.”

Before bed, he has a purple porridge chaser.

“I’ve done 1,800 TV programs and probably 4,000-odd radio programs and written 30 cookbooks and here I am finishing off my days with such a simple thing and being completely satisfied by it,” he said. 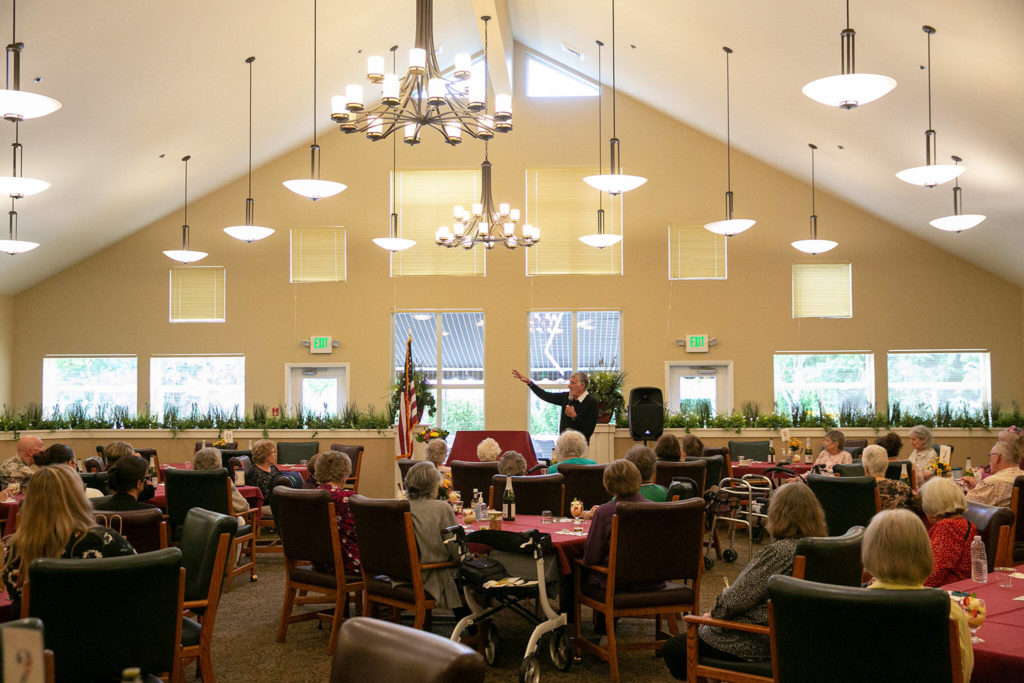 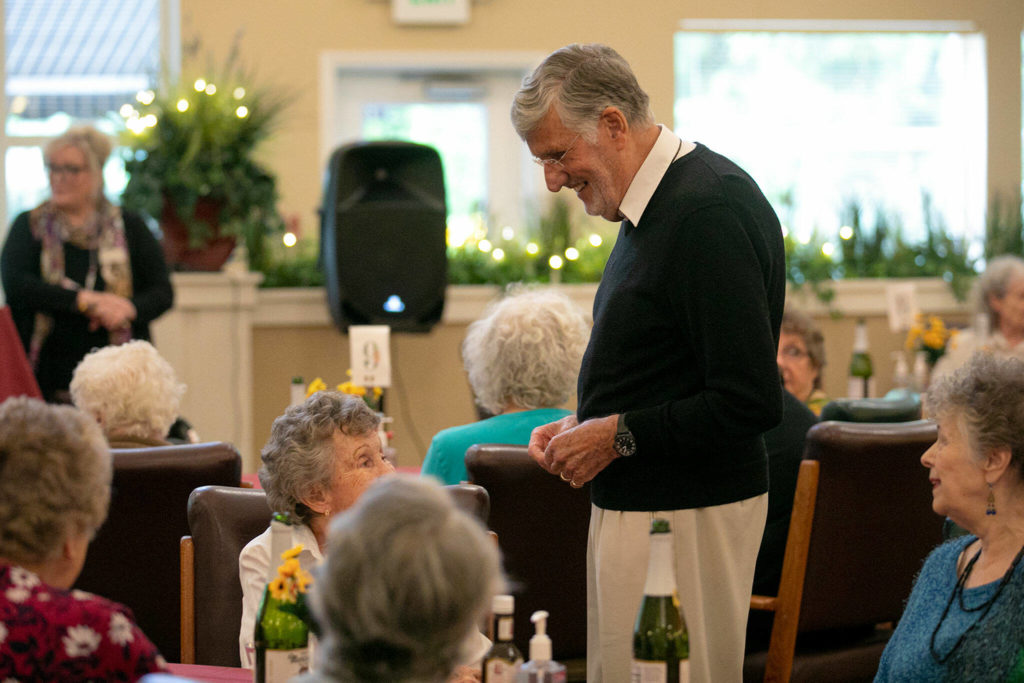