Glacier Peak senior running back Ryan King stretches across the goal line for a touchdown during the Grizzlies’ 42-13 season-opening rout of Snohomish in the annual crosstown rivalry game Friday night. (Kevin Clark / The Herald)

In their season opener Friday night, the Grizzlies got things started with a tone-setting beatdown of their crosstown rival.

Glacier Peak overpowered Snohomish on both sides of the ball and remained perfect in the Dick Armstrong Cup, pummeling the Panthers 42-13 in the annual non-league rivalry clash at Veterans Memorial Stadium.

The Grizzlies (1-0) improved to 11-0 in the Dick Armstrong Cup since it began in 2012. They’ve won nine of the 11 matchups by double digits, with Friday’s rout being the second-largest margin of victory in the rivalry series.

This one was a thorough manhandling from the start.

By the time Glacier Peak took a 35-0 lead near the midway point of the third quarter, the Grizzlies had outgained the Panthers by a whopping 328-28 margin in total yardage.

Much of the hype surrounding the Grizzlies this fall is a product of their elite playmaking talent at the offensive skill positions, including a pair of Pac-12 senior commits in Washington State-bound athlete Trey Leckner and Oregon State-bound tight end Cooper Jensen.

But on Friday, it was Glacier Peak’s offensive line that made the biggest statement.

The Grizzlies played smashmouth football, methodically running up and down the field all night against Snohomish’s defense.

They racked up 212 yards rushing on 38 carries, with a healthy 5.6 yards per attempt.

They scored touchdowns on all six of their non-end-of-half possessions.

“Our offensive line just set the tone all night long,” Keck said. “The big offensive weapons get a lot of recognition, but we feel like the quality of our offensive line is pretty dang good. And I just love the way that those guys are playing football right now.”

Behind that unit up front, it was a running-back-by-committee night for the Grizzlies.

Ryan King, a senior, led the way with 50 yards and two TDs on nine carries. Roman Foster, another senior, added 45 yards on seven rushes. Chrisvin Bonshe, a junior, chipped in 43 yards and a TD on nine carries.

Lien completed throws to seven different receivers. His top target was Jensen, who hauled in three receptions for 56 yards and a TD.

“Our brand of football is we really want to come downhill and be physical, and then hit big in the passing game,” Keck said.

The Grizzlies were just as impressive on defense.

They flew around and bottled up the Panthers’ run game, totaling seven tackles for loss. They unleashed relentless pressure on Snohomish senior quarterback Kale Hammer. And by almost the midway point of the third quarter, they’d held the Panthers (0-1) to just three first downs — two of which came via penalties.

“Those guys played lights out,” Keck said of his defense.

Glacier Peak even dominated on special teams, coming up with a blocked punt and a long kickoff return.

The Grizzlies opened the game by marching for a 13-play, 90-yard TD drive, capped by a 4-yard scoring run by King.

Glacier Peak then forced a three-and-out and partially blocked the ensuing punt, giving its offense prime field position at the Snohomish 21-yard line. Three plays later, King ran for a 6-yard TD to make it 14-0.

Lien added a pair of TD passes in the second quarter. He found Jensen wide-open in the end zone for a 17-yard score and then connected with senior Austin Burns on a 10-yard wide-receiver screen to give the Grizzlies a 28-0 halftime lead.

Glacier Peak scored on another wide-receiver screen near the midway point of the third quarter, with Lien and senior Gabe Russel connecting for an 8-yard TD pass to make it 35-0.

Snohomish got on the board later in the third quarter, when senior Caleb Podoll broke free for a 33-yard TD run on fourth-and-4.

But on the ensuing kickoff, Bonshe answered with a 90-yard return to the Panthers 2. Three plays later, Bonshe punched it in for a 3-yard scoring run to stretch the Grizzlies’ lead to 42-7.

“He’s a big-time player,” Keck said. “I think he’s the next Division-I guy from Glacier Peak.”

Hammer added a late TD run for Snohomish, which is expected to contend for another Wesco 3A South title after winning at least a share of the league’s past three championships.

But on Friday night, the Panthers simply ran into a loaded Glacier Peak team that’s considered to be among the best in the entire state.

One of the only downsides for the Grizzlies came on the second play from scrimmage, when 6-foot-4 senior receiver Logan Szarzec appeared to hurt his leg on a 15-yard catch-and-run. After laying on the field for a few minutes, Szarzec walked off on his own. But he didn’t return to the game.

Up next for Glacier Peak is a challenging three-game stretch of non-league showdowns.

The Grizzlies travel to face perennial Class 4A state power Camas next Friday. They square off against Wesco 3A North favorite Ferndale on Sept. 17 at Lumen Field, the Seattle Seahawks’ stadium. And then they head to Northern California, where they face a strong Sacramento-area Rocklin team on Sept. 23.

The tough non-league gauntlet should provide postseason-level challenges for a Glacier Peak team that’s looking to make a deep state playoff run. The Grizzlies reached the 4A state playoffs last year and were on the verge of the state quarterfinals before blowing a 21-point second-half lead to Bothell.

“We wanted to go schedule those type of games to hopefully help give us a chance to be ready to go come November,” Keck said. “It’s gonna be a big three weeks for us.” 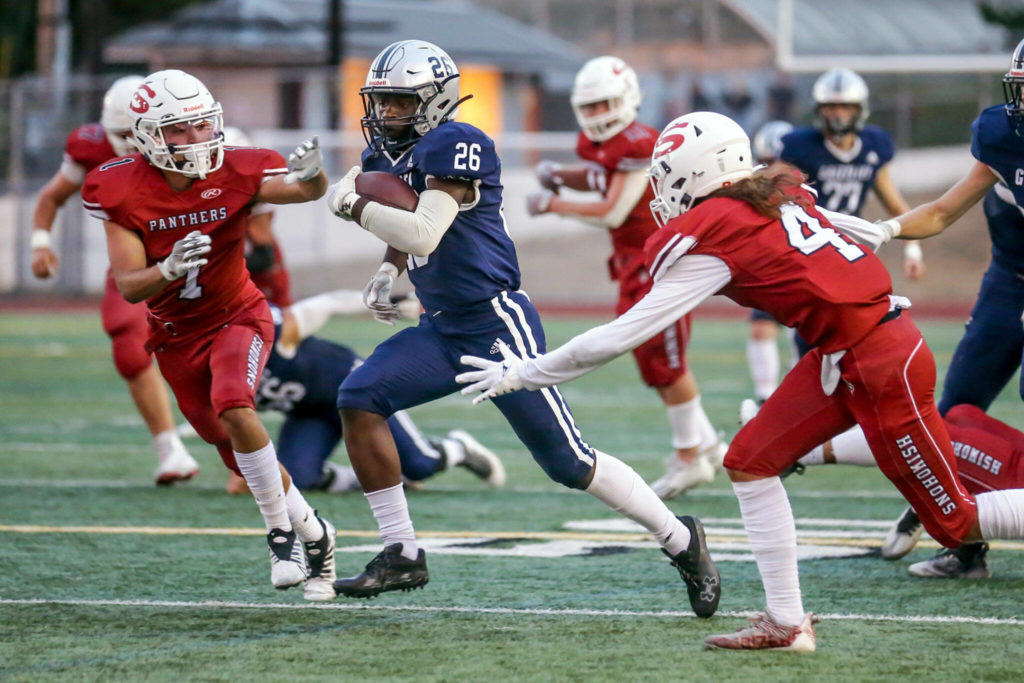 Glacier Peak’s Gabe Russel is forced out of bound by Snohomish’s Parker Jackson Friday night at Snohomish High School in Snohomish, Washington on September 2, 2022. Glacier Peak led 28-0 at the half. (Kevin Clark / The Herald)

Glacier Peak’s River Lien draws back to pass against Snohomish Friday night at Snohomish High School in Snohomish, Washington on September 2, 2022. Glacier Peak led 28-0 at the half. (Kevin Clark / The Herald)

Snohomish’s Kale Hammer avoids a sack by Glacier Peak’s Will Jenkins Friday night at Snohomish High School in Snohomish, Washington on September 2, 2022. Glacier Peak led 28-0 at the half. (Kevin Clark / The Herald)

Meet the scouts who have been Silvertips since the beginning