Phillipa Evans-Lopez’s mother, Kris Evans, hugs Detective Brad Walvatne after Anthony Garver was sentenced to 32 years and one month in prison for the murder of Evans-Lopez. (Andy Bronson / The Herald)

EVERETT — No one deserved to die the way Phillipa Evans-Lopez did, her mother said at the killer’s sentencing Wednesday.

“It was planned out, evil and disturbing in so many ways,” Kris Evans said.

Anthony Garver, 31, gagged and blindfolded Evans-Lopez, 20, in an upstairs bedroom in Lake Stevens. He tied her limbs to the posts of a bed with electrical cords. He slashed her throat and stabbed her in the chest two dozen times.

Because the murderer thought she’d make an easy target, according to Superior Court Judge Eric Lucas. Lucas sentenced Garver to 32 years and one month in prison, the maximum under state standards, closing a chapter in a torture-murder case that has taken six years to play out.

Garver entered the courtroom Wednesday in an orange inmate’s jumpsuit. His trial had been delayed years as judges and psychologists found his mental illness — schizophrenia, bipolar disorder, and other diagnoses dating to his youth — made him unable to assist in his defense. After a highly publicized breakout from Western State Hospital, and years of adjusting his medication behind bars, he was found competent to stand trial in July.

In a bench trial last month, Lucas found the defendant guilty of murder following weeks of testimony from police, forensic scientists and a cast of people who were in touch with the victim in the days before June 17, 2013, when Evans-Lopez was found dead at a house on 15th Street SE. The last time detectives know for sure that Evans-Lopez was alive was early June 14, 2013. She’d been seen on camera with a man in a dark hoodie, Garver, at a McDonald’s in Everett, a Walmart on Highway 99, and a McDonald’s in Lake Stevens.

Evans-Lopez was using drugs that morning, witnesses testified, and she told Garver about her boyfriend’s drug-dealing operation. In a 2½-hour interview with a detective at the time of his arrest, Garver called the woman naive and stupid for revealing certain things. The conversation struck Lucas as one of the most unusual things he’d ever heard, and he saw it as a key to understanding Garver’s motives, he said when he delivered the guilty verdict.

“If you are having homicidal fantasies and looking for someone to kill with impunity, what better target could you have, than a black, drug-addicted, tiny female, who no one cares about because they are black?” Lucas said, at the earlier hearing. “She fit everything he was angry at. … If you kill her, everyone is going to look at (the boyfriend) and his crew as the assailant, rather than looking for the silent seeker after homicidal fulfillment.”

Days passed before a bail bondsman reported finding the body on a Monday morning. Lucas said the torture could have gone on through the weekend. On top of devastating injuries, an autopsy showed six smaller knife wounds on the woman’s body, deputy prosecutor Matt Hunter wrote in a sentencing memorandum.

“Such wounds can only represent taunting, terrorizing, testing or some combination of the three,” Hunter wrote. “It is difficult to imagine the fear instilled by such a method.”

Garver’s semen was also discovered at the crime scene.

Garver testified at the trial. He claimed he’d had consensual sex with Evans-Lopez at a house that morning in the Everett area. He denied having any part in the murder, or harming Evans-Lopez in any way. Yet his DNA was found upstairs in the Lake Stevens home.

On the day he was arrested, Garver had a folding knife in his pocket with a blue star-shaped hinge. Blood stuck in the grooves tested as an apparent match for Evans-Lopez.

Defense attorney Jon Scott argued the blood may have been contaminated at a crime lab, when other pieces of evidence were tested. Lucas did not buy that argument.

On Wednesday, the judge countered Garver’s claim that he was friends with Evans-Lopez. He knew her whereabouts just before she was killed, but he did not report what he knew to police.

Hunter wrote he was seeking the maximum penalty for the crime, in part, because “our society’s safety depends on him being restrained as long as legally possible.”

Garver had been convicted of felony harassment in 2006; possessing ammunition after being committed to a mental institution in 2009; vehicle theft in 2009; criminal endangerment in 2010; and first-degree murder with a deadly weapon on Oct. 29.

The defense suggested a sentence of 25 years behind bars.

At the time Scott took over the murder case, Garver had been unmedicated in solitary confinement for about eight months. He had to be wheeled into court wearing a spit mask. He was paranoid and unaware of what was happening.

His illness “has affected him from the time he was a toddler to the present day,” Scott said. “ … He is not disposable. He is not a human that should be warehoused.”

At the time of his arrest and during the trial, Garver’s illness did not appear to be debilitating.

“He is intelligent, which, in my opinion, makes him even more dangerous,” said the deputy prosecutor, Hunter. “That intelligence makes him capable of carrying out whatever wicked thought enters his mind.”

Garver declined to speak at the hearing, but in a one-line statement, he continued to profess his innocence. No one besides his attorney spoke on his behalf.

One of Evans-Lopez’s sisters held a portrait of the young slain woman, while the mother spoke.

“My daughter was not perfect — ” Kris Evans began, before she choked up with emotion.

“My daughter was beautiful, free-spirited and had a lot of growing up to do,” she continued. “She had so much more life to live, and all of it was taken and cut short because Anthony Garver decided that she had lived long enough.”

In a tattoo on her right shoulder, Evans carries a story her daughter wrote at age 9: “One day a princess was going for a walk, and it started to rain and she did not see the sidewalk anymore, so she got lost and she got sad and she didn’t see her mom,” it begins. In the story, it stops raining. The girl sees her mom again, and tells her, “I love you, Mom.”

Before he handed down the sentence, Lucas turned to the young woman’s family. He told them now it was time to heal.

“Healing this hurt,” he said, “is the best way to celebrate and preserve what was good about Phillipa.” 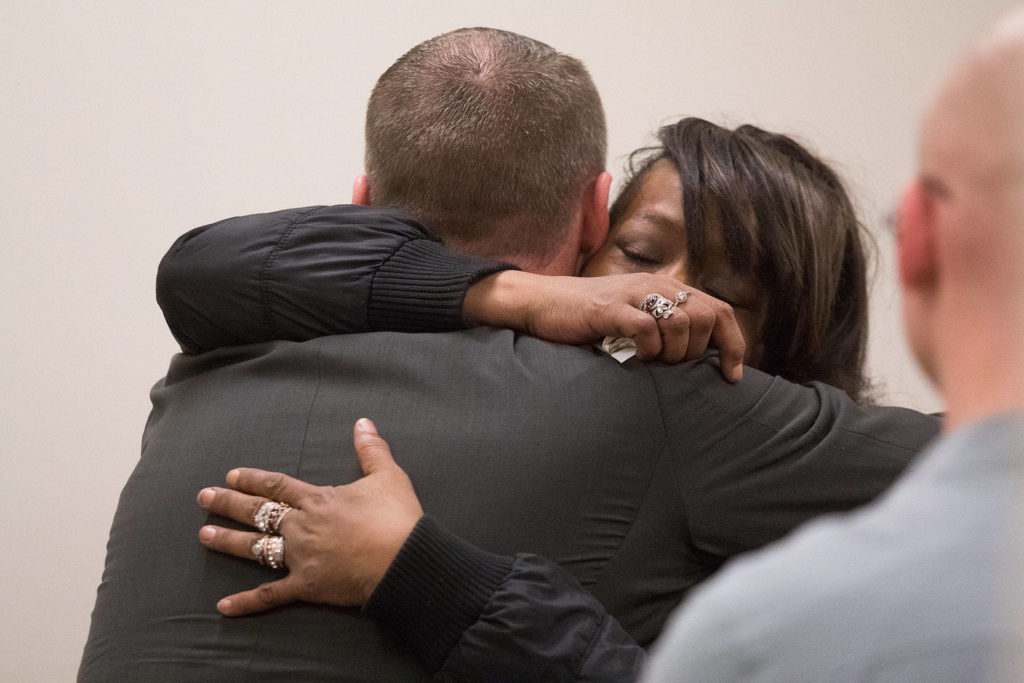 Anthony Garver listens to the prosecutor during his sentencing for the murder of Phillipa Evans-Lopez on Wednesday in the Snohomish County Courthouse in Everett. Garver was sentenced to 32 years and one month in prison. (Andy Bronson / The Herald)

Phillipa Evans-Lopez’s mother, Kris Evans, hugs Detective Brad Walvatne after Anthony Garver was sentenced to 32 years and one month in prison for the murder of Evans-Lopez. (Andy Bronson / The Herald)

Lower car tabs are a hit with voters, again