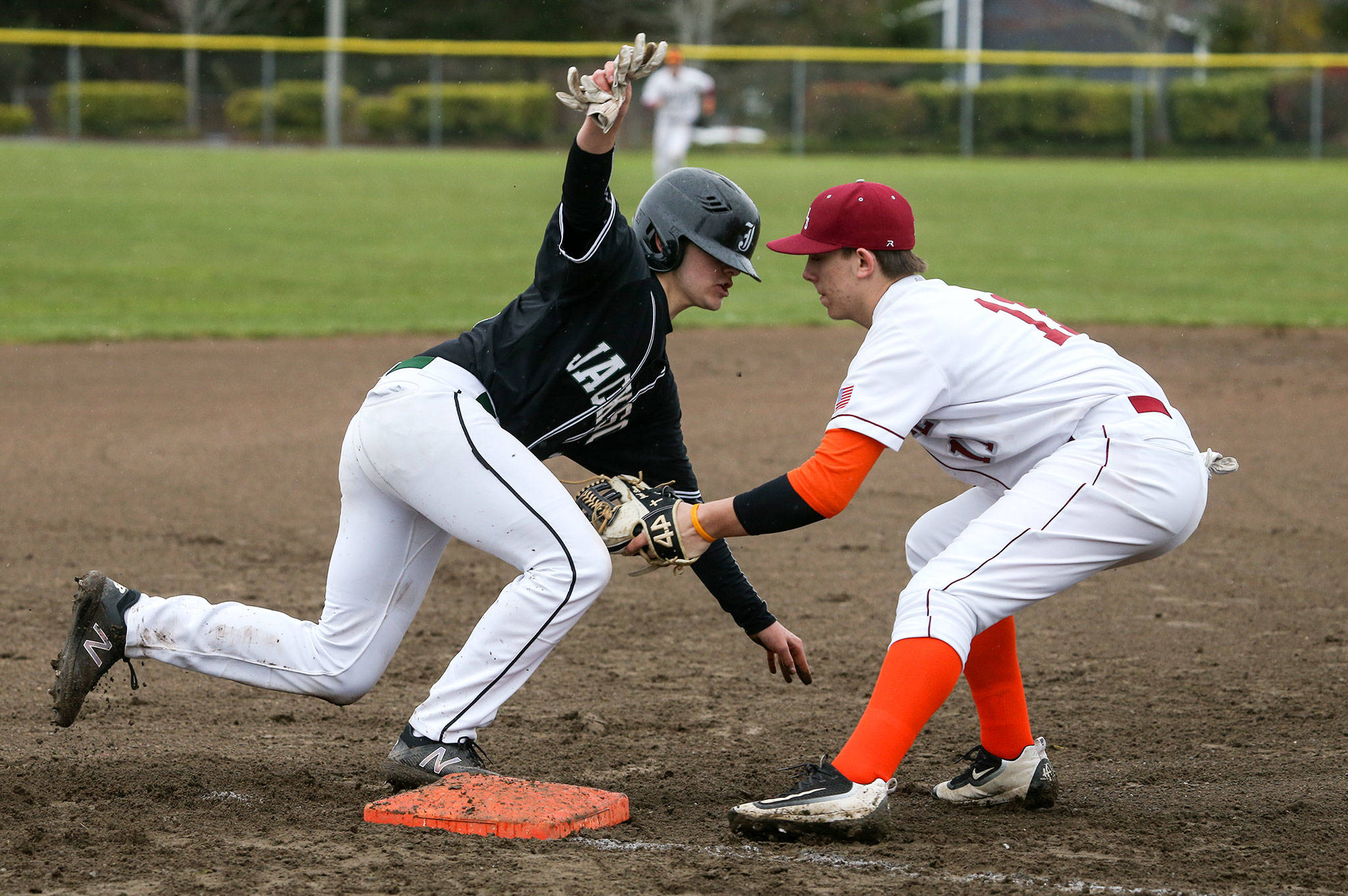 In a game last season, Jackson’s Diego Altamirano avoids the tag at third base by Cascade’s Jacob Sesso. Both teams appear poised to contend for the Wesco 4A title again this spring. (Andy Bronson / Herald file)

Five storylines to watch from the local high school baseball scene this spring:

1. Jackson opens as the Wesco 4A favorite.

After a district title and Class 4A state quarterfinal appearance last season, the Timberwolves enter as the Wesco 4A favorites, garnering five of the seven first-place votes in the conference’s preseason coaches poll.

The coaches predicted Mount Vernon and defending Wesco 4A champion Cascade to be Jackson’s leading challengers in the league-title race. Mount Vernon brings back three of its top four pitchers from last year’s state-qualifying team, and Cascade returns three of its six all-conference players.

2. How many teams will Wesco 4A send to state?

One of the more intriguing storylines to follow in local prep sports this year has been the new bi-district setup between Wesco 4A and KingCo 4A.

Under the new postseason format, the top five finishers from the leagues’ joint, 12-team bi-district tournament advance to state. So instead of Wesco 4A sending two teams to state as in years past, the conference theoretically could advance anywhere from zero to five teams.

Along with the aforementioned trio of Jackson, Mount Vernon and Cascade, teams such as Monroe, Glacier Peak and Lake Stevens could factor into the new-look battle for state berths.

Lake Stevens will be a particularly interesting team to watch. The Vikings were picked sixth in the league’s preseason coaches poll, but have slugged their way to a 5-1 start while averaging 9.5 runs per game.

After reaching the state tournament just twice prior to 2016, the Eagles have made three consecutive state appearances. And with another roster full of talented arms and bats, Arlington appears well-positioned to continue its unprecedented run of success.

The Eagles return nearly all of their pitching from last year, including senior Cameron Smith and junior Owen Bishop. The dynamic one-two punch has allowed just two runs in a combined 24 innings this spring, posting 48 strikeouts and just six walks.

And despite graduating current Seattle University outfielder Gavin Rork and several other top hitters, Arlington still has plenty of returning talent throughout the lineup. Through six games, the Eagles are batting .363 as a team and are averaging 9.3 runs per contest.

Arlington has been flat-out dominant thus far, outscoring opponents by nearly eight runs per game during a 6-0 start. The Eagles, riding a 30-game conference win streak dating back to April of 2017, are heavy favorites to claim a third straight Wesco 3A North crown.

Edmonds-Woodway, coming off back-to-back 3A state semifinal appearances, is a slight favorite in the league’s preseason coaches poll. The Warriors graduated a handful of key players, but return one of their top pitchers.

Shorewood, looking to bounce back from a rare losing season, brings back the bulk of its roster and also figures to be a strong contender.

Meadowdale was picked third in the league’s preseason coaches poll, but the defending Wesco 3A/2A champions have struggled to an 0-4 start. The Mavericks graduated nine seniors, including standouts Tommy Dimmock and Travis Hagan.

Another team hit hard by graduation is Mountlake Terrace, which lost a strong core from last year’s 2A state runner-up squad.

And there’s also the question of how newcomers Archbishop Murphy and Cedarcrest will fit into the mix of what is now an eight-team Wesco 3A/2A South.

5. The area’s sophomore class is loaded with talent.

Another talented sophomore to keep an eye on is Monroe pitcher Ryan Lynch, who posted a 1.91 earned-run average in 40 1/3 innings last season as a freshman. Two months ago, his fastball was clocked at 87-88 mph by Baseball Northwest.