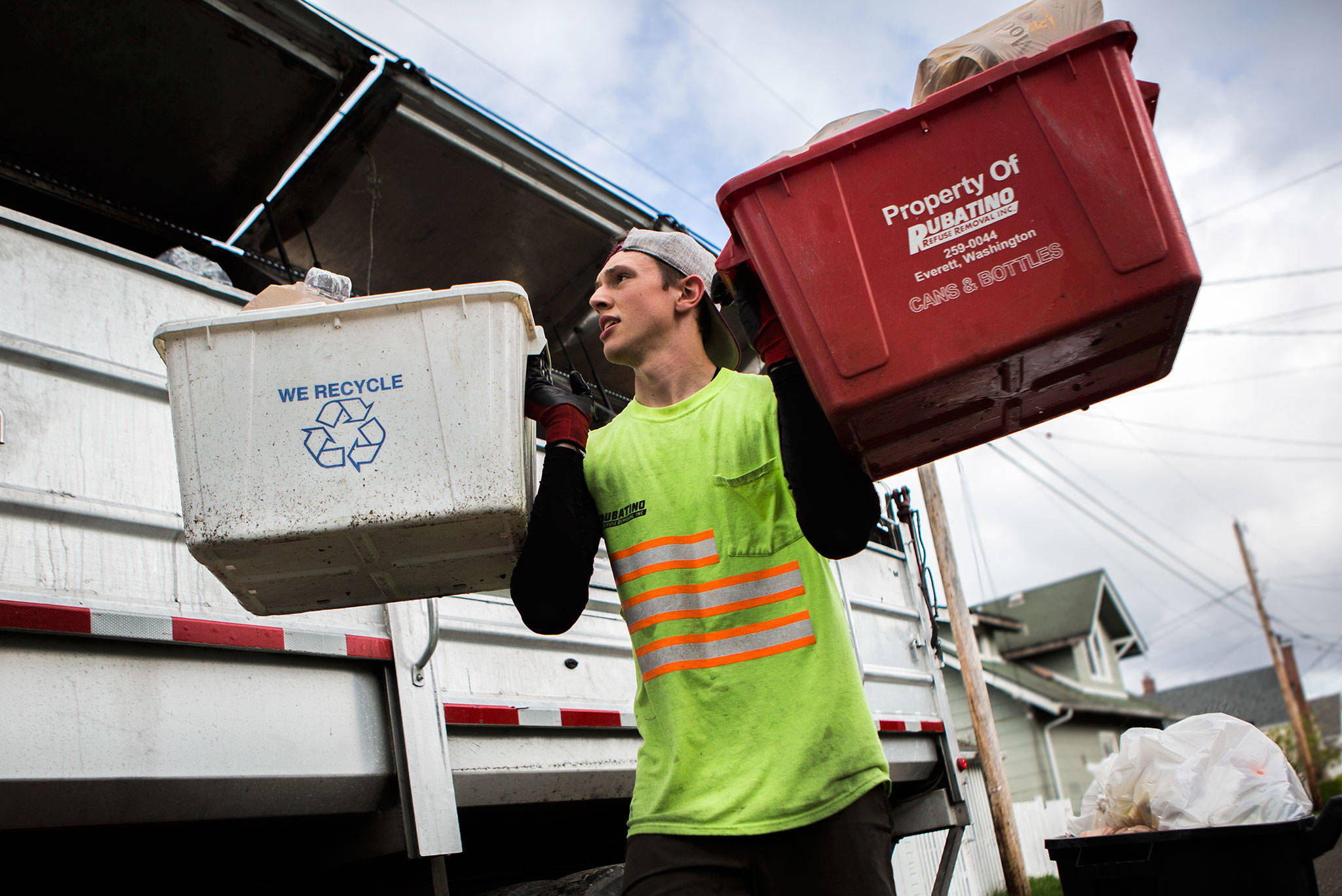 Olivia Vanni / The Herald Jeremy Youngren, 20, an employee of Rubatino Refuse Removal, carries two recycling bins to his truck during his route on Wednesday in Everett.

EVERETT — Jeremy Youngren starts to cruise through alleyways around 6:30 a.m. in a big rumbling truck, five days a week.

His Wednesday route snakes through 64 blocks of the Riverside neighborhood in north Everett.

Most of his time is spent on gravel side streets. Every dozen feet or so, he presses a yellow button in the cab. The hydraulics gasp as the rig comes to a stop.

He jumps out and grabs two recycling bins at a time. He uses his knee to hoist them over the side of the vehicle, or lifts with his arms to catapult the contents into the truck bed.

“When it’s wet and they are on your shoulders, the little holes on the bottom of the bins, everything just kind of runs down your arms,” he said.

Youngren, 20, picks up recycling for Rubatino Refuse Removal. It’s one of the local garbage companies affected by new regulations in China. The country no longer accepts certain recyclables and has tightened rules about contaminated products.

The recycling market has since overflowed and made the process more expensive.

The changes don’t necessarily affect Youngren’s job. However, he does have to deal with items that ruin the recycling.

“I’ve had chew spit down my arm, and I’ve had gross warm beer in my mouth, all kinds of stuff,” he said. “You kind of tell yourself it’s just water over and over again until you start to believe it.”

China stopped accepting several recyclables more than a year ago. The list includes certain mixed paper and plastics, and anything contaminated by more than 0.5 percent. That number used to be about 5 percent.

Jeremy Youngren throws a bin to his plastics section of his truck during his route on Wednesday, April 24, 2019 in Everett, Wash. (Olivia Vanni / The Herald)

Because of the shift, the recycling market here has become flooded and the price for those materials has dropped. That means people are paying more for their garbage services.

One main expense has been transportation. Before when China would send goods to the United States, the empty ships returning to Asia were loaded with recycling.

At one time it was the sixth-largest export from the United States to China, according to the state Department of Ecology.

“The China ban probably is harder on the West Coast than other areas that were shipping it someplace else,” he said.

In the past the business received roughly $100 per ton of recycling. That’s now worth about $10, he said.

“Right after the China clamp-down we had a month or two where we might have even paid a few dollars to get rid of the material,” he said.

Jeremy Youngren raises the walls of his truck as the sections begin to fill up during his route on Wednesday, April 24, 2019 in Everett, Wash. (Olivia Vanni / The Herald)

The company serves Everett, and has started to charge customers a few more dollars for recycling every month.

Companies that pick up from the curb have seen more of a difference than drop-off stations, such as those through the Snohomish County Solid Waste Division.

The county still is affected by cost, just not as much, said Polagaya McLaughlin, a solid waste project specialist.

“It’s a drop in the bucket compared to what they are collecting at the curbside,” she said.

It’s important for people to make sure recycling is clean and dry, and that no garbage gets in, said Jackie Lang, a spokeswoman for Waste Management.

“Food waste, liquid, dirty diapers: Any of those materials that are put into the recycling truck have the potential to contaminate the whole load,” she said. “Any time the material is getting wet and dirty because of garbage, that material has to be taken to the landfill.”

That isn’t necessarily a new rule, but has become more strict. The company in the past year has slowed down processing lines and added more people to sort it all.

Rain can even ruin recycling. It’s best to make sure can lids are closed, and open containers are left under cover, Lang said.

Youngren, the Rubatino worker, says wet paper is the hardest to lift. The moisture gets trapped between magazine and newspaper pages.

His route changes daily, but he stops at around 1,000 houses each morning. Most have multiple bins.

“Ibuprofen is definitely your friend on this job, for everything from head to toe,” he said.

Youngren has done this work for about six months now. He’s had to get used to some aspects of the job, but enjoys it.

He makes his way through the narrow roads with the windows down and noise-cancelling headphones on. It seems to help protect the hearing in his left ear, the one closest to the diesel engine.

He doesn’t wear much gear aside from gloves and a bright yellow reflective T-shirt with cut off sleeves.

Paper and cans pile up as the day goes on. Youngren, who’s 6-foot-1, hops into the covered bed a couple of times per shift to compress the cardboard.

He doesn’t take recycling that has garbage in it. Instead, he leaves a neon green brochure that across the top in capital letters reads “Recycling instructions.” It outlines in two columns what’s allowed and what’s not.

Some days customers bring him cold drinks. He appreciates it.

“Especially on a hot day with an ice cold water, it’s like, ‘I could hug you right now, that just made my day,’” he said. Jeremy Youngren throws a bin to his plastics section of his truck during his route on Wednesday, April 24, 2019 in Everett, Wash. (Olivia Vanni / The Herald)

Jeremy Youngren raises the walls of his truck as the sections begin to fill up during his route on Wednesday, April 24, 2019 in Everett, Wash. (Olivia Vanni / The Herald)