The Monroe High School softball team is a sisterhood.

In an incredibly rare dynamic for prep sports, the Bearcats have three pairs of sisters on their team.

And all six of them are starters.

Together, the six of them comprise two-thirds of Monroe’s starting lineup.

“The fact that we all get to be on the same team is a very unique experience,” River Mahler said. “I’ve never really heard of that happening before. Like, we make up six of the nine positions out there. And we just have this connection. … It’s super cool.”

The three pairs of sisters help anchor a talented Monroe team that enters the Class 3A District 1 Tournament with a 14-4 record. The fourth-seeded Bearcats open postseason play with a district quarterfinal matchup against fifth-seeded Everett on Tuesday.

“The cool part about these pairs of sisters is they truly do enjoy playing the game with each other,” Monroe coach Ashley Tuiasosopo said. “… It’s really fun to watch.”

And it’s not just the individual pairs of sisters who share close bonds. The six of them have known one another for years.

“It’s like living in a house with them, honestly,” Anniston Oylear said about the six of them playing on the same team. “… I’d consider us all sisters — all six of us.”

As a result, they’re good at keeping things loose on the field. In the middle of games, they said it’s not uncommon for them to crack a joke and share a laugh.

“This is probably the goofiest team I’ve ever been with, because we’re so comfortable and we just understand (each other),” River Mahler said.

As the Bearcats’ pitcher-catcher duo, the Nagy sisters share a particularly unique dynamic.

Being three years apart, this is their first time playing together on the same team. But the two sisters have practiced together for years.

And they’ve been highly effective as battery mates this season, with Emma Nagy posting a 2.85 earned-run average in 113 innings pitched. She’s totaled 122 strikeouts and just 39 walks.

“She’s grown up catching me, which is why this works so well,” Emma Nagy said. “… There’s a lot of trust.”

Monroe senior Emma Nagy has had a strong season in the circle while pitching to freshman catcher and younger sister Scarlett Nagy. (Kevin Clark / The Herald)

That chemistry between the Nagy sisters is definitely evident on the field, Tuiasosopo said. Even though Scarlett Nagy is just a freshman, she’s often given the freedom to call her own pitches — instead of having a coach do so from the dugout.

“They’ll be moments in the game when I’m like, ‘There’s something going on. Let the sisters get in a rhythm together,’” Tuiasosopo said. “Scarlett does a great job of knowing what her sister wants or what her sister can hit in the moment.

“It’s just a connection that is really hard to find in high school between your catcher and your pitcher.”

Sharing the same house also provides a major benefit for the Nagys, who study film together from their previous games.

“We’ll talk about what we should’ve done differently or (what to do) the next game,” Emma Nagy said. “It’s like, ‘Maybe we want to start throwing more rise balls in this game’ or something like that. We kind of get a game plan going.”

For the Oylears, this is their first season playing high school ball together. But they played club ball on the same team last year and Little League together when they were younger.

“It’s just one of the most fun experiences I think I’ve ever had, playing with my sister,” Anniston Oylear said. “She’s my buddy.”

Being only one year apart, the Mahlers have grown up playing sports together from a young age. Jessi Mahler, who also plays volleyball for Monroe, took a break from softball before returning to the sport in high school and playing alongside her older sister.

“It’s been super fun playing together,” Jessi Mahler said. “… She’s just taught me a lot. She’s always giving me tips and motivating me to do better.”

Tuiasosopo, a former University of Washington softball player, is the youngest of five siblings who were all UW or professional athletes.

Having grown up in a large and talented sports family, she said it’s fun to watch the sisters’ different personalities on the field.

“The Mahlers just exude that fun and that enjoyment,” Tuiasosopo said. “And then the Nagys, that’s like your typical pitcher (and) catcher. They’re a little bit more serious and zoned in — but they have to, because that’s your battery. And then the Oylears, those two are so competitive.

“It’s really crazy how they all have competitiveness in them, but they all show it in different ways,” she added. “The three sets of sisters complement each other so very well.”

And as siblings, they aren’t afraid to hold each other accountable.

“If they’re not running hard, then they get on each other,” Tuiasosopo said.

Tuiasosopo said the sisters’ tight-knit bond stretches beyond themselves and has a positive impact on the entire team.

Even on off days, players often schedule informal practices on their own.

“Usually as a coach, you’re trying to get all your kids to get to that sort of sisterly bond,” she said. “… So having almost half my team walk in the dugout (like that), it’s been awesome.”

Heading into the district tournament, the Bearcats are laser-focused on earning a trip to state.

None of Monroe’s current players were in high school back in 2018, the last time the program did so. The Bearcats fell short in 2019, and both the 2020 and 2021 postseasons were canceled because of the coronavirus pandemic.

“This team wants it,” River Mahler said. “I’ve never met a group that wants it so much. And I think making it to state, it (would) show that all of our hard work has paid off.” 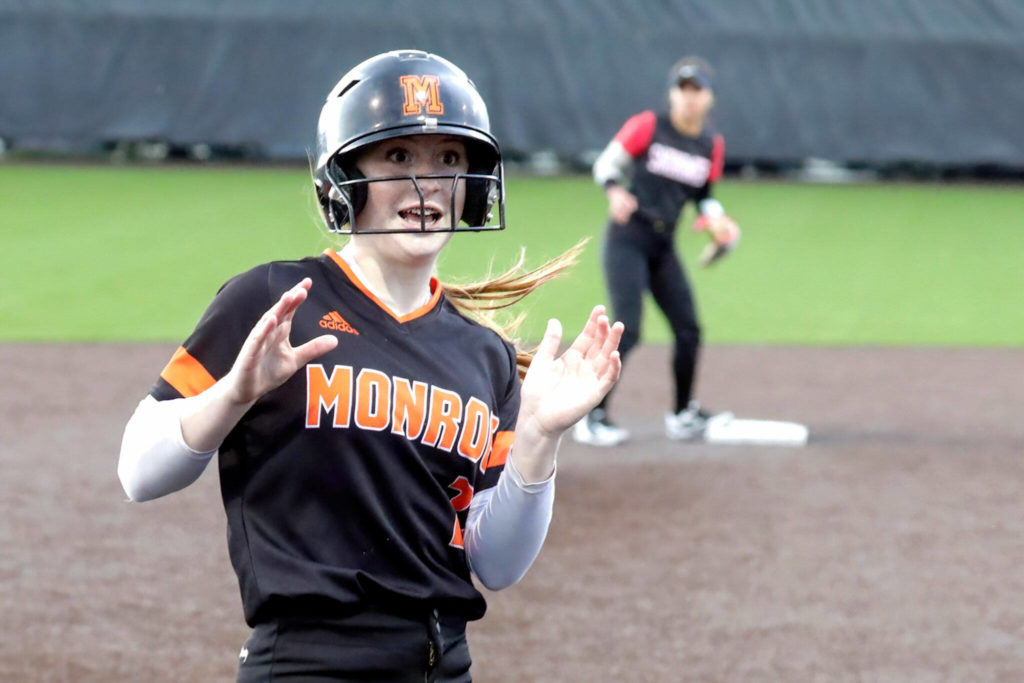 Monroe senior Emma Nagy has had a strong season in the circle while pitching to freshman catcher and younger sister Scarlett Nagy. (Kevin Clark / The Herald)

Monroe’s Emma Nagy winds up for a pitch against Snohomish on May 9 at Monroe High School. (Kevin Clark / The Herald)

Monroe freshman Hadley Oylear is safe at third base. (Kevin Clark / The Herald)